The Link between Identity Documents and Welfare Delivery 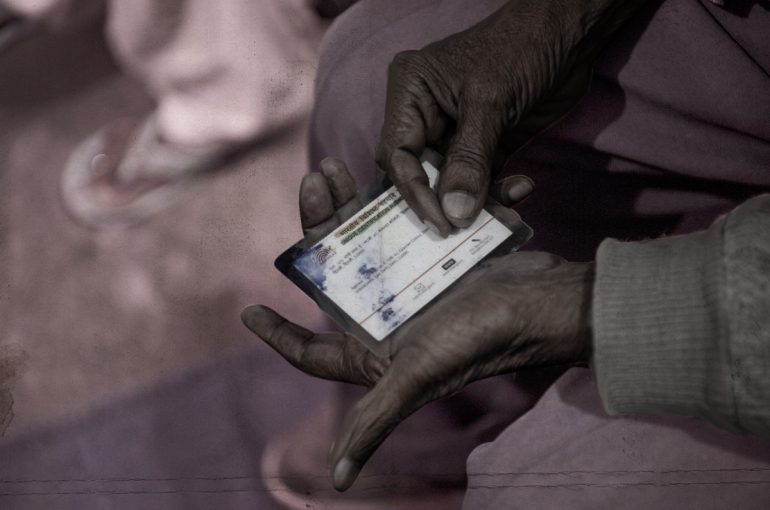 By Piyusha Verma and Anveshi Gupta

Kushbu Chanda is a 15-year old, specially-abled orphan, living with her grandmother in Indore. ‘Haqdarshak’ Sandhya Maske met her during one of her field visits in December 2021. Since Kushbu did not have an Aadhar card, she had been unable to receive any of the multiple scheme benefits she was entitled to. Sandhya took Khushbu’s grandmother to the nearby Aadhar centre and facilitated the application process. Kushbu recently received her Aadhar card! Along with helping her receive benefits from other schemes, the team is now processing her application for the disability pension scheme.

Khushbu’s story is one of the many success stories at Haqdarshak where access to vital identification documents have made a world of difference to the quality of life of beneficiaries.

In most countries, access to social protection is given only for those who can provide their identity documents. Unfortunately, obtaining a recognised and accurate ID in India is an uphill task. The process is plagued with discriminatory designs, bureaucratic red tapes, and technical failures. A large part of the Indian population is, therefore, left out of the system.

The barriers to getting identity documents are many — illiteracy, the digital divide, exorbitant fees, lack of address, complex paperwork, unclear eligibility rules, poverty, isolation, and lack of access to transportation.

The pandemic highlighted the significance of these documents. Over 73% of applications done by Haqdarshak during the fatal waves of Covid — a significant chunk of this was for migrant workers — involved either procuring ration cards or seeding them with Aadhar and mobiles to receive ration and DBTs. Tasleem Ahmed, a construction worker from Uttar Pradesh, who was serviced by Haqdarshak during the pandemic, shared his story with us.

I had applied for the BOCW card, savings bank account, and the Pradhan Mantri Jeevan Jyoti Bima Yojana through Haqdarshak. Thankfully I was issued the BOCW card and subsequently received INR 2000 in cash. This helped me a lot during the first lockdown as there was no work available — I managed to keep my family afloat.

In the last 6 years, Haqdarshak has facilitated over 2 lakh applications for documents such as caste certificates, ration cards, disability certificates, PAN cards, and BOCW cards. We have also done a lot of Aadhar card seeding, a critical feature known only to a few. Our services were extended to numerous citizens who were unable to claim their entitlements due to not only a lack of awareness about the documents but also a reluctance to engage with India’s complicated bureaucratic system.

02/ Who are the Undocumented?

In developing countries like India that are yet to achieve universal identification, the undocumented remain concentrated among certain groups within the population. However, research suggests that many people have problems satisfying identification requirements. This is particularly stark among individuals living in poverty, those with disabilities or substance abuse problems, prisoners and other institutionalised cohorts, minority ethnic groups, victims of natural disasters, the elderly, children, individuals who are homeless, and people with tenuous housing arrangements. (Wilson, 2009)

In an assessment conducted by Haqdarshak in the district of Purbi Singhbhum, Jharkhand, it was found that more than 80% of the population comprising Dalits and other backward castes did not have caste certificates. Due to the absence of caste certificates, their families could not apply for any of the schemes that were designed specifically for them.

Among older individuals, women tend to have lower rates of documentation. Most elderly women spend their entire lives outside of spheres that encourage and/or demand documentation, such as formal sector work activities. Lower levels of literacy also work against documentation. Women, especially those who reside in rural areas or urban slums, experience some of the most striking levels of discrimination. Many have had trouble receiving the social benefits they are entitled to and have also been excluded from voting. According to a World Bank report1, two-thirds of the widows and divorced women in Delhi eligible for pensions, do not avail them due to lack of information and transaction costs of enrollment.

Our field cadres also faced reluctance from people when it came to extending benefits to their female family members. An HD, Durgesh Nandini from Indore, shares how the perception of citizens can transform with proper guidance.

A family in the locality was conservative and was not open to educating women. But over several interactions, we were able to build trust with them. Eventually, they allowed their teenage daughter to accompany me to the bank and open a bank account for herself. Now she can benefit from multiple DBT schemes that she is eligible for.

In November, 2021, Haqdarshak conducted a Needs Assessment survey with around 140 Uber drivers from urban NCR, Maharashtra, and Karnataka. In the survey, around 61% shared that they needed more information about the schemes they could apply for. Around 71% had never heard about the e-Shram card and wanted more information from us about it. However, some of the survey participants also expressed doubts about receiving any benefits from it.

First, we intervene by creating awareness among vulnerable groups about documents and welfare schemes that are designed for their benefit. If they’re interested, we assist them through the system’s cumbersome and time-consuming application processes. We then facilitate their enrollment into welfare schemes. We also track whether they have received the benefits!

Specific marginalised groups are by default or by design excluded from access, either because distribution logistics fail, or features of the system make certain requirements impossible to be fulfilled for some. For example, documents relying on biometrics may inevitably exclude the elderly and manual informal workers whose fingerprints fade over time. This section should ideally then be guided to obtain IDs through OTPs.

Other challenges include procedure-related misses, difficulties in filling applications, the digital divide, and having to pay huge sums to dalals or agents to get them made. At Haqdarshak, we aim to simplify the process and reduce the effort required for obtaining IDs. For instance, HD Balakrishnan accompanied Laxmi to the Collector’s office, where she was directly able to submit the application — she now receives INR 1000 as widow pension per month.

According to a study, 20% of beneficiary exclusion occurred due to issues with their documentation. Individuals like Khalid depend upon timely access to public assistance programs for overcoming their socio-economic needs.

04/ HQ — An Alternative to Intermediaries

In the survey with Uber drivers mentioned previously, at least 45% respondents shared that they faced challenges in form submission, both online and offline. Some of them preferred to get their documents made by a dalal because getting a document made consumed almost an entire workday. Plus, they often had to make multiple visits to the offices. This meant that they would lose their day’s wages. This was especially troublesome for those who drove a car owned by someone else and had to meet daily targets. A respondent shared that a dalal had once charged him an exorbitant amount of INR 5000 to get a driving licence made. According to the agent, urgent 1-day services cost huge amounts.

However, it has also been observed that seeking an intermediary’s assistance does not ensure benefits. Seema Sahu from Kurmapali, Chhattisgarh, wanted to get a domicile certificate and had paid three intermediaries to get it done. A domicile certificate is proof of residence and is useful to avail benefits of other schemes. However, despite her efforts, she was unsuccessful until our ‘Haqdarshak’, Aasha Sao, helped her get the certificate in 2 days.

For citizens from the Non-General category, the circumstances can be a double whammy. This ethnographic study documents the experience of a Non-General family in Delhi that could not get its applications processed because of the discriminatory attitude of government officials. They eventually ended up paying huge amounts to a dalal, which seemed to be the only means for procuring documents from official channels.

Haqdarshak, on the other hand, provides assistance at minimal and non-arbitrary rates to citizens. Our model also doubles up as the source of livelihood for the HDs who are part of the same community. Based on a survey of ‘Haqdarshaks’ conducted in Maharashtra and Chattisgarh, their average earning per application under the Livelihood model was INR 40. The remuneration is based on a formula which takes into account their expenditure per application (travelling, photocopy costs), their effort, and turnaround time. Under the Direct Implementation model, citizens need to pay only the document charges decided by the government.

For example, the service fee for processing Aadhar card, caste certificate, Mamta card, and Bhamashah card in Rajasthan was INR 100 each. The cost of obtaining a voter ID and birth certificate was INR 50. In either case, door-to-door services by Haqdarshak also reduced costs incurred by the citizens.

Haqdarshak’s model of having HDs — who are a part of the community and interact with the citizens by meeting them, at times by visiting them at their homes — aids in understanding requirements that may not come up otherwise. Our solutions are often customised to meet the needs of a particular region. For example, in Karnataka, CSCs were charging villagers INR 150‒300 for one Ayushman Bharat card. The price set by the government was INR 35. This was because the state government agency primarily assigned to implement these services, Karnataka One, was 2 hours away from the village. Haqdarshak worked with the head office of Karnataka One in Bangalore to arrange registration camps in the villages. Through these camps, we were able to help almost 2000 citizens across 5 villages to avail the benefits of the cards at their convenience.

Therefore, by addressing commuting challenges in a rural area, Haqdarshak was able to supplement the government’s efforts in efficient service delivery.

05/ Partner with Us to Scale this Impact

Haqdarshak’s objective is to empower citizens with information on their rights and smoothen the process of procuring documents and identity proofs. Having appropriate documents, that are prerequisites for applying for social security schemes, brings them a step closer to availing the benefits of these schemes.