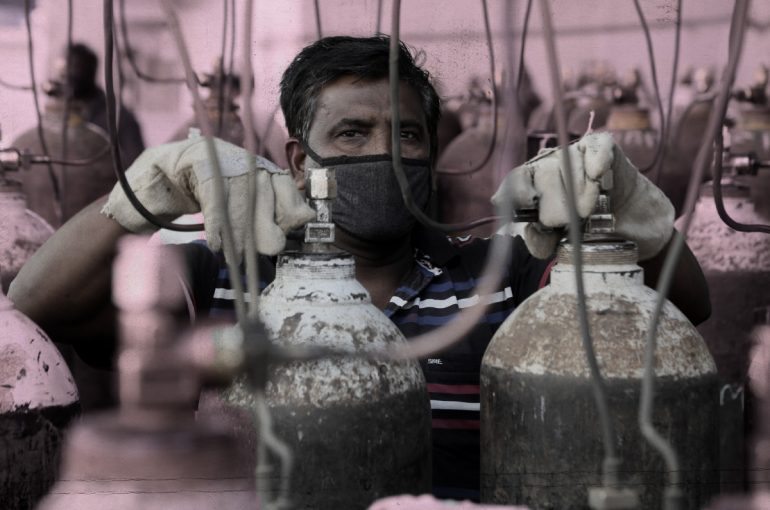 With Inputs from Garima Agrawal

“Do you also run around government offices for compensation?” I’m often asked this question by several people and oddly enough, my story is no different. Going back and forth between offices is a part and parcel of the policy-level bottlenecks we commonly talk about.

In May 2021, my father passed away due to COVID-19. During this time, the Rajasthan Government announced a financial relief package for women whose husbands had died due to COVID-19. It was declared that they would receive an ex-gratia payment of INR 1,00,000 along with a monthly widow pension of INR 1500. Instead of bringing some relief to our grieving family, this announcement became the beginning of a long struggle to claim our entitlement.

To begin with, my father’s death certificate mentioned cardiac arrest as the cause of death. Despite multiple requests and hospital visits, they refused to change it, making us ineligible for the relief package. Having lived and worked in Kota, I was fortunate enough to be connected to some influential people within the city. They helped us sort things out through their contacts at the hospital.

The procedure to apply for the relief package was unclear, so I visited a local e-mitra centre. They directed me to the collector’s office. At the collector’s office, we were asked to get my father’s RTPCR and CT-SCAN reports, hospitalisation records, and medical bills, along with multiple identity documents for both my parents — voter IDs, Aadhaar cards, and ration card. Once we had these documents in place, we were told to submit my mother’s Jan Aadhaar card and a self-attested declaration on a stamp paper of INR 250. This took an additional 5–7 days as my mother did not have a Jan Aadhaar card. Due to the absence of formal guidelines, this to-and-fro between multiple offices led to a lot of frustration and despair. During this time, the COVID compensation office moved to a new location as well. We were told that the waiting period for receiving the cash benefit was one month. After two months had passed, I visited the Nagar Nigam office — the only response we received from the authorities was to wait patiently. After consulting with a few people, I visited the Sub Divisional Magistrate’s office and was informed that the application was pending in Jaipur, and that nothing much could be done about it.

Finally, after 3 months of countless visits, calls, and follow-ups, my family received the promised amount of INR 1,00,000. However, even after 7 months, we don’t know when my mother will start receiving the widow pension. We’ve completed all the paperwork, but have not received any proper response regarding the delay in the disbursement of her pension. Navigating these complications is an undue burden (and a near-impossible task) for grieving families.

India is the second-worst COVID-19 affected country in terms of overall case numbers. A study published in the journal, Science, estimates the death count in India to around 3.2 million. This is over 6 times the official death count of 5,13,843. Another study by the Centre for Global Development put the estimate between 3.4 million to 4.7 million. These deaths are excluded from official numbers because of incomplete certification of COVID-19 deaths and misattribution to chronic diseases. In rural areas, deaths occurring without medical supervision are not counted. This exclusion becomes a barrier for families seeking compensation, at a time that is exceptionally financially challenging.

On March 14, 2021, the central government declared the COVID-19 pandemic as a national disaster under the 2005 National Disaster Management Act. Following a petition by advocates Gaurav Kumar Bandal and Reepak Kansal, the central government announced the Mukhyamantri COVID-19 Parivar Aarthik Sahayta Yojana, through which states would provide a one-time assistance of INR 50,000 to families of all persons who have died due to COVID-19. This is 1/8th of the INR 4,00,000 originally stipulated under the Act.

In addition to the central mandate, states like Rajasthan, Delhi, and Karnataka have announced their own plans for further assistance. Families are eligible for assistance if their loved ones died within 30 days of a COVID-19 diagnosis, regardless of whether the death took place while in hospital or at home. For the cases wherein the deaths occurred while in hospital, the 30-day limitation was later removed.

While the government’s guidelines seem reasonable at first glance, they pose a massive problem. Garima Agrawal and I look at some of the challenges with ex-gratia assistance for aggrieved families.

1. Lack of Documentation
With India’s underfunded infrastructure, even in pre-COVID years, only 22% of registered fatalities were medically certified and given an official cause-of-death. So even when a death certificate is issued, many don’t explicitly list COVID-19 as a cause-of-death. In many cases, lung failure, respiratory disease, or cardiac arrest are listed instead. In these cases, family members can furnish a positive RT-PCR report.

In some states like Delhi, cremation or hospital receipts are also accepted. Other states like Kerala and Telangana have introduced online and offline options to amend and apply for new death certificates. Uttar Pradesh will also accept reports from low-cost rapid antigen tests. More states need to expand the list of acceptable documents to ease the burden of verification, so that more families with legitimate claims can be included under the scheme.

2. Lack of Aadhaar Linkages
Delays in disbursements occur when beneficiaries’ bank accounts and Aadhaar cards are unlinked at the time of application. This also applies to situations where the government is reaching out to beneficiaries directly. It makes it difficult for the government to verify the account holder’s identity and disburse funds to the correct beneficiary.

3. Lack of Awareness
In some states like Bihar, Andhra Pradesh, Assam, Haryana, Karnataka, Punjab and Kerala, the compensation claims filed are still lower than the official death toll. State governments need to actively promote compensation schemes by publishing ads in vernacular news media, and directly reaching out to families whose kin are on the official list. In Maharashtra, Gujarat, and Telangana, where awareness is high, the claims filed are in multiples of the official numbers.

4. Understanding of Application Procedures and Lack of Transparency
Lack of clarity on the application procedures is also hindering claims. The Supreme Court has also expressed concern over the high rate of rejections for compensation claims in some states like Maharashtra. 66,706 claims have been rejected due to incomplete paperwork or for being submitted offline — this is 30% of the total claims submitted! On 4th February, the court acknowledged that “official statistics are not true on death figures” and asked states to review rejected applications. They were asked to grant compensation and to ensure that applications were not being rejected purely on technical grounds. In case of rejection, without clear communication and access to grievance redressal mechanisms, families are left waiting indefinitely. It is therefore important to establish a process for appeal when applications are rejected without a clear reasoning. This is especially important since the procedure for the claim itself has been unclear to many families.

5. Access to Online Platforms
Many states have prioritised online methods of application without creating sufficient avenues for offline applications. Our teams have found that even uploading PDFs of scanned documents is extremely challenging for the low-income and rural communities we work with. Maybe, accepting photographs instead of PDFs could ease the process?Such families approach CSCs or panchayat offices for support. This dependency can cause further delays and errors, which further lead to rejections. The most recent census found that only 77.7% of Indians are literate, and this is even lower for women in rural areas where just over 50% of women can read and write. Completing the tasks of collecting the appropriate paperwork, filling out forms, and providing medical information can be difficult. Women are also less likely to own a mobile phone, use mobile internet, or have a bank account. This makes it harder for women to access compensation. Many people have filled out forms more than once after experiencing technical glitches or, in a lot of cases, due to the fear of rejection.

04/ Facilitating Applications on the Ground

The death toll in Maharashtra is the highest in the country at 1,43,706. Till early February, 2.26 lakh claims have been filed. Since May 2021, Haqdarshak’s Maharashtra team has been supporting claim filing in areas such as Vasind (Thane), and Pali (Raigad). In partnership with grassroot NGOs and CSOs, our teams worked to spread awareness, and also offered support for application processes. They held meetings with panchayat members, and helped identify eligible families through visits to primary healthcare centres and government departments. Through these efforts, we were able to help families who were unaware of the compensation.

One of them — Pranali, 25, from Vasind — has been living alone. Her mother passed away a few years ago, and she lost her father in the second wave of COVID-19. Our team informed her about the state’s COVID-19 ex-gratia financial assistance scheme and assisted her with the application. Pranali received the compensation. However, till February 2022, only 5 of the total families we assisted in the region had received the cash benefit.

Haqdarshak will continue to support people in securing the documents they need for receiving compensation. Families who have lost breadwinners should not have to struggle with verification — they deserve timely compensation, period.

This article is part of a series. In the next piece on COVID Compensation, you will hear from a program team member who facilitated applications in Delhi NCR.

Special thanks to Siddharth and Prathamesh from the Programs team, and Jyotsana from the Operations team for their significant inputs and cooperation!